It’s “the sports car of cannabinoids,” according to one California cannabis testing lab. That’s certainly a sexier way of referring to the THCV molecule than by its full name, tetrahydrocannabivarin. But the zippy tagline might be misleading. While some claim the little-known cannabinoid packs a punch—“a powerful high without the munchies,” one website promises—the science tells a different, much more complicated story.

THC is, of course, famous for its psychoactive properties. CBD, by contrast, is known for having next to none. As science dives deeper into the physiological effects of lesser-known compounds in cannabis, there’s always that voice calling from the sideline: “Yeah, but does it get you high?”

This is science, after all. It’s complicated.

Researchers haven’t been talking about THCV for long. In the 1960s, scientists were isolating and identifying all sorts of new cannabinoids: CBD, CBG, CBC, CBDV, and—in a seminal 1970 paper—THCV. The vast majority of study, understandably, focused on that intriguingly psychoactive molecule, THC.

Like you might guess from those letters, THCV is a not-too-distant cousin of THC. A side-by-side diagram makes clear THCV is basically the THC molecule with the end snipped off, just a few carbon atoms shy of what emerged as the family favorite. Science calls this an analogue—it’s similar, but different in an important way.

THC is what’s called a CB1 receptor agonist—it activates CB1 receptors in the brain, and that activation is what allows for psychoactive effects.

Early studies suggested THCV was about a quarter as potent as THC in this regard, meaning it did seem to exhibit psychoactive effects. But later research suggested something interesting: The behavior of the molecule seems to change depending on the dose.

At lower doses, THCV acted as a CB1 antagonist—in very, very simple terms: does not get you high. At higher doses, however, it can switch, behaving as a CB1 agonist, much like THC. In other words, take a lot of THCV, and zoom—it’ll tickle that CB1 receptor and produce a psychoactive buzz.

(For a quick catch-up on how these receptors work, see Bruce Barcott’s explanation of why THC is psychoactive and CBD isn’t.)

The buzz associated with THCV, from what little science has studied it, appears to be clear-headed and stimulating. It’s said to intensify the euphoria of THC—although it doesn’t last as long. A THCV-induced high seems to set in quickly yet fade faster, demonstrating about half the duration of THC.

THCV seems to act a bit like CBD in that it modulates and dampens some traditional effects of THC.

There are good reasons beyond the buzz to study THCV. If you’ve read about the cannabinoid before, for example, you’ve probably read of lab tests that show the cannabinoid can suppress food consumption and even encourage weight loss. (Cue a parade of articles on “skinny pot.”)

Keep in mind, first, that THCV is a minor cannabinoid, found at trace levels in most strains. It’s found at slightly higher concentrations in certain strains of African descent, and in some cases plants “highly predominant in this agent have been produced,” leading cannabinoid researcher Dr. Ethan Russo wrote in 2011.

Most consumers will probably (for now) only encounter THCV in small amounts, for example in African landrace strains like Durban Poison. Even if you’re able to track down a higher-THCV strain, such as Doug’s Varin or Pineapple Purps, you’ll be consuming THCV alongside other cannabinoids—most notably THC.

THCV seems to act a bit like CBD in that it modulates and dampens some traditional effects of THC, which normally bind easily to CB1 receptors in the brain. Take THCV’s effect’s on the munchies: In mice, the ingestion of THCV has led to decreases in both food consumption and body weight. (Decreased food consumption is a general effect of compounds that block CB1 receptors.)

The effect doesn’t seem to turn off hunger completely. Mice deprived of food—the ones that were truly hungry, in the nutritional sense of the word—ate roughly the same amount whether they’d received THCV or not. Nor did it decrease food intake or body weight of obese mice, though THCV did seem to improve insulin resistance in those animals. That’s likely one reason scientists have begun looking into the possible effects of THCV on diabetes.

Dosing may also play a role here. If THCV is blocking CB1 receptors at lower doses and reducing food intake, we might expect higher doses to activate those receptors and instead increase food intake. But that’s just speculation—such an experiment hasn’t been tried yet. 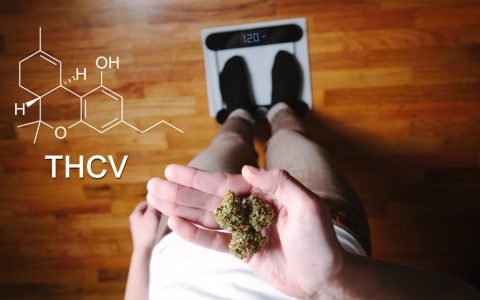 There are also indications THCV could reduce anxiety attacks in PTSD patients, improve tremors and motor control problems associated with Alzheimer’s disease, and stimulate the growth of bone cells. Research suggests it may also have anti-inflammatory effects.

For now, we still don’t know a ton about THCV. In cosmic terms, it’s a tiny satellite in a system that science has only recently pulled into view. We’ve long been dazzled by the sparkle of THC. We’re starting to understand the sway of CBD. But as we pull them into focus, THCV and other less obvious cannabinoids are proving to be captivating worlds of their own. What a universe a single plant can unlock.

Has been added to the cart!
View Cart Check out